The international judo federation has dared. The reasoned but firm attitude of President Marius Vizer has not been unambiguous. The Grand Slam of Abu Dhabi in November 2018 seemed to usher in a new era of concord. Although tempered by the notable absence of many countries at the Tel Aviv Grand Prix, the decisions taken seemed likely to effectively combat any form of segregation resulting from political and religious fundamentalism that has not spared judo since the beginning of the century. 21st century. The 2019 edition of the Paris Grand Slam, however, reminded observers of the harsh reality of systematic oppositions. The road will be long before the actions meet the promises in the fight against discrimination.

Spectators, athletes, but also journalists and coaches posted their surprise at the defeat of Iranian world champion Saeid Mollaei against Ruslan Mussayev, 209th in the world. Defeated in a sham fight after only 17 seconds of fighting, he gets out of the tatami headlong wiping his tears. Asked what appears to many people as the concealed refusal to face the next round of the Israeli Sagi Muki, Marius Vizer recognizes the persistence of a worrying situation. 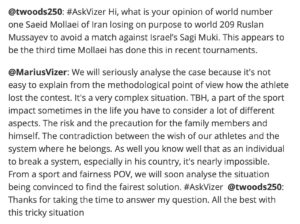 It’s not a new problem. It is recurrent and tends to amplification. At a time when France denounces the resurgence of anti-Semitic acts, these repeated transgressions to the values ​​of sport and judo in particular must be fought constantly and at all levels at the risk of trivializing such behavior. The scheduled defeats or the last-minute withdrawal of competitors forced – when they are – to submit to the official guidelines were initially ignored or almost tolerated under the pretext of probable retaliation against the athletes and their families. A change of scale occurred in 2004 during the Olympic Games. In a game of fools, the overweight of Arash Miresmaeili -72.4 kg instead of the 66 allowed-was ultimately officially attributed to a health problem and not to the political process and a deliberate and widely publicized refusal to confront an Israeli opponent. Pass. There is nothing to see.

Celebrated as a hero on her return home, recipient of the Olympic Champion Award – $ 115,000 – as well as a special grant to “Strengthen Spirituality in Sport” – a $ 5,000 prize to perform a trip to Mecca, he now occupies an important position in the ministry of sports of his government as evidenced by the interview reported in the magazine Spirit of Judo.

The political and religious convictions of certain combatants are sufficiently displayed to leave no doubt as to the adherence of their actions to the instructions imposed on them. On the other hand, others are under such pressure that they cannot resist the prospect of the direct and indirect consequences that could be devastating for them and for those around them. But, the question remains whole. The world of sport strives to fight against doping by arguing principles of equity. In this area, recent developments show that the institutions and systems concerned, in other words the originators, do not escape sanctions. The fight against exclusion and discrimination requires that we act similarly, that we dare more to defend the values ​​that underpin our discipline. 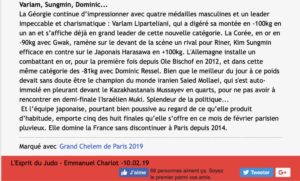 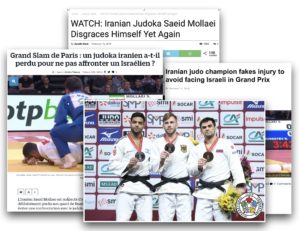 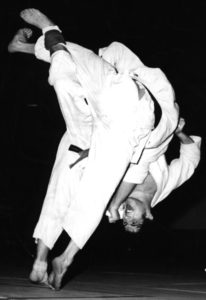